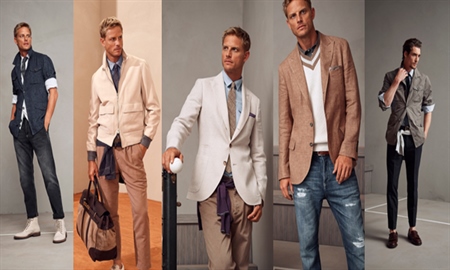 Confindustria Moda estimated an increase by 2,6% for menswear resulting from the sales on markets such as Germany, China and Russia, along with South Korea and Austria.
Yearly exports totalling 6,1 billion were driven by the +10% on the leading market, Germany, and by the +8,3% of United Kingdom (second biggest buyer).
Promising Performance in China (+18%) and Russia, ranking ninth and eleventh among the biggest customers of Italian mensware. Troubles in the States (fifth biggest buyer), where demand decreased by 5%.
When it comes to domestic consumptions, they decreased by 1,5% last year according to Sita Ricerca,surveys, which highlighted a gradual reduction of the down fall, though at the beginning of the year a new step change was reported leading to a worsening compared to January-February 2017.
As for distribution channels in February 2018 compared to March 2017 positive trends are observed for the distribution chains (+0,6%) and the Gdo large-scale retail ( (+0,3%), together accounting for nearly 59% of the market.
The reduced-prices retails report a +1,3%, while e-commerce remains stable (-0,2% and 6,5% of the market). Independent retails go down (-9,3% and 25% of the market) and street vendors (-6,6%).