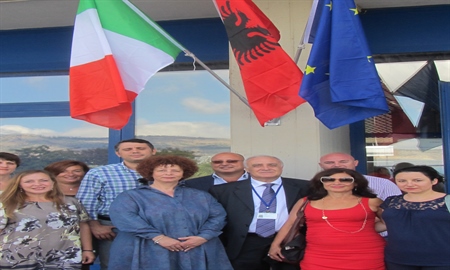 Within the close existing partnership, a delegation from Albanian customs authority visited in form of an update on Friday September 15th the SOT (Territorial operations Office) in Nola directed by dr. Giovanni Santaniello along with Nola CIS and Interporto premises The Albaniam delegation also visited the offices in the Port of Naples and the airport Napoli Capodichino.

Nola customs, given its closeness to CIS, recorded the busiest exchanges (import/export) with Albania in the entire Center-South of Italy.

Same growing trend for the office also during the first months of 2017: according to Campania and Calabria Authority, directed by dr. Alberto Libeccio, more than 77% of the value of goods exported to Albania passed through Nola from January to August 2017. To that, already in the first 8 months of 2017 the operations of Nola customs office exceeded the total value of exports to the Albanian country as of last year (7,5 mln against 6,4 mln).

The reason for the above is due to the presence of a well rooted logistic and productive network on Nola area, particularly for what textiles and clothing are concerned. When looking at Italy/Albania trade exchanges going through Nola customs the majority of duties charged is on the cost of fabric processing and are exempted on the finished product given the presence in the CIS of several companies active in textiles/clothing distribution.

The overall value of the goods transited in Nola SOT in 2016 is approximately 1,5 billion Euros, both import and export included, with mean volumes in the first months of 2017 higher than the previous year.